Over the last many years I've been published I've tried to answer that question. Is if reviews from trade magazines like Publisher's Weekly?  They've traditionally been hard on thrillers and on my work so I was thrilled to see they liked My Sister's Grave, a lot. Here's what they had to say.

"Dugoni does a superior job of positioning [the plot elements] for maximum impact, especially in a climactic scene set in an abandoned mine during a blizzard" 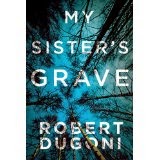 So here's my question? What do you look for when you are trying to decided whether to buy a book? A trade review like PW. The reviews on Amazon or Goodreads? Word of mouth? And if you have the secret answer about what sells books, by all means, share!
Posted by Unknown at 8:25 AM